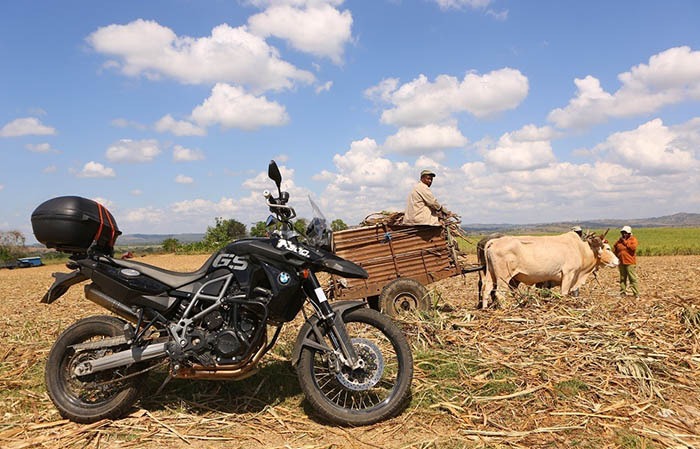 The itinerary includes visits to the Comandancia de Che, his headquarters in Havana; Santa Clara, the industrial city that Che’s rebel troops captured in December 1958 and where he is buried; plus Cuevas de los Portales, a giant cave where Che headquartered during the Cuban Missile Crisis. Other highlights include the beautiful tobacco-growing region of Viñales, the Bay of Pigs, the enchanting colonial city of Trinidad, and the snow-white beaches of Cayo Santa María.

The tour is priced from $7,966, depending on motorcycle. Participants may choose a modern Suzuki V-Strom or Harley-Davidson. The deadline to book a spot on the trip is July 31, 2017.

Baker’s presence ensures that participants learn about Cuban history and culture while maximizing interaction with Cuban friends — from artists, baseball players, and classic car owners to local harlistas, owners of pre-revolutionary Harley-Davidsons — as required by the U.S. government’s people-to-people regulations.

In 1996, Baker — the 2008 Lowell Thomas Award-winning ‘Travel Journalist of the Year’ — shipped his BMW motorcycle to Cuba and rode 7,000 miles while researching his Moon Cuba guidebook. His literary travel book, Mi Moto Fidel: Motorcycling Through Castro’s Cuba, describing the journey was published by National Geographic Adventure Press and is a two-time national book award winner. In 2012, he secured a people-to-people license from the US Department of Treasury’s Office of Foreign Assets Control to offer the first-ever group motorcycle travel of Cuba for U.S. citizens. He has since led more than 100 ‘people-to-people’ trips to Cuba.

Cross Cultural Journeys has been leading groups of Americans to Cuba legally since 1998. One of the first U.S.-based tour operators to obtain a people-to-people license from the Treasury Department’s Office of Foreign Assets Control (OFAC), the Seattle-based company has taken thousands of American travelers to the island over the past two decades.

Web-ready images of motorcycles and bikers in Cuba, including tour leader Christopher P. Baker, are available for download in this Google Drive folder.