Cuba is such a big, diverse, and beautiful island. There are countless ways to see and get to know its incredible land and people. So where do you start? Here are just three of the many ways that we can suggest:

1. Through its Music and Rhythms 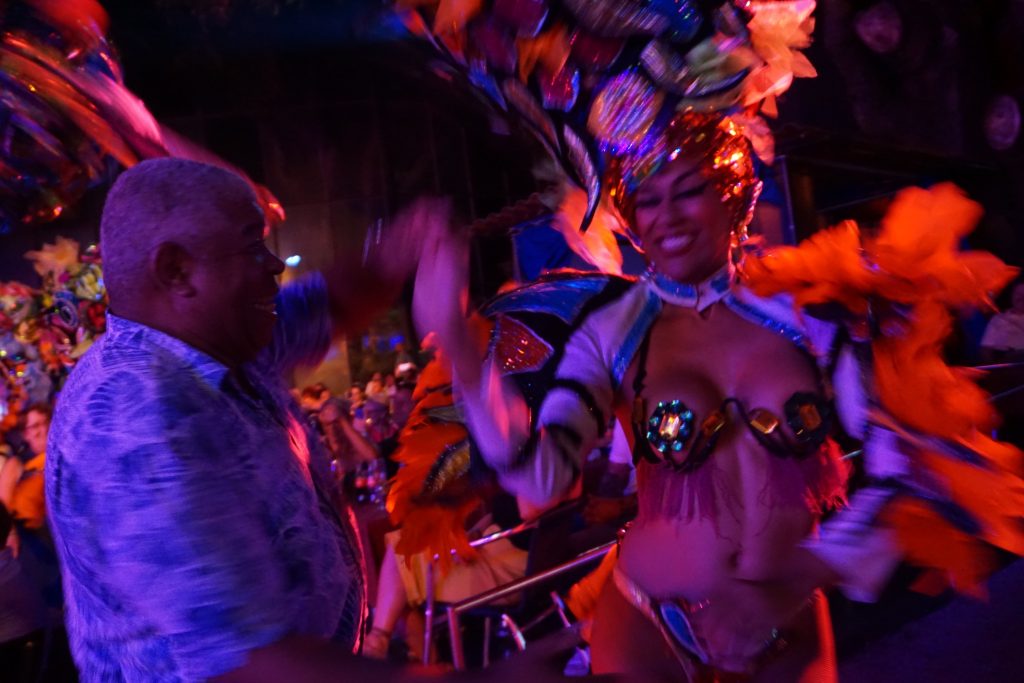 It’s Friday night in Havana, flying down Calle 23 in the back seat of a classic pink Chevy convertible. Our taxi driver, a young man in his mid-twenties, proudly shares with us how this car was his grandfather’s and points to all the bells and whistles that have been added on. He nods with a big smile toward the large modern speakers booming behind us. They have likely been hand-carried to Cuba by a relative living in Miami. Old and new blend together. He turns up the volume. Like the never-ending waves crashing over the Malecón waterfront, the driving beats of Reggaetón and Latin techno music sweep like a tsunami through the new bars, cafés, nightclubs, and now over us during our taxi ride through Havana.

Reggaetón, a modern blend of Reggae and Latin rhythms, accounts for much of the mass-produced popular Cuban music heard around the world, and pulsing through the streets of Havana today. But this city is still full of authentic traditional and jazz music venues where you can hear masterful performances of styles like salsa, son, bolero, rumba, and cha cha.

On our upcoming trip The Musical Heart of Cuba (October 5–15, 2017), journey leader Carol Steele, a world-renowned percussionist who has been traveling to Cuba for 30 years, will give you an inside view of Cuba’s thriving music and dance scene. You’ll meet Cuban musicians, and have your mind blown daily at some of Havana’s best venues — such as Zorra y el Cuervo, Café 23, El Gato Tuerto, Jazz Cafe, and the spectacular patio of the Hotel Nacional (especially amazing on Friday and Saturday nights). Carol will also take you outside Havana and show you some of the provincial cities and rural towns that gave rise to these traditional styles, like the old sugar milling town of Trinidad (a UN World Heritage site), the eco-community of Las Terrazas, and the port city of Matanzas, birthplace of the rumba.

2. Through its Indigenous and African Roots 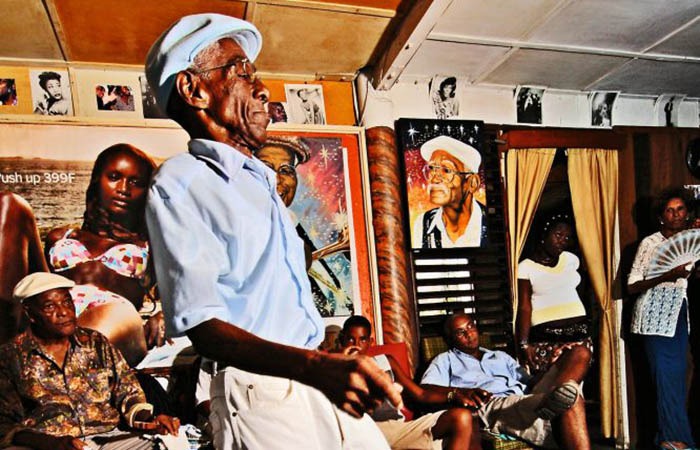 It’s Tuesday night at Casa de La Trova, in the tiny downtown of Baracoa on the Eastern tip of Cuba. Decades of cigar smoke infuse the red velvet curtain serving as the backdrop to a beautiful Chengui band, a trio of men in their 70s and 80s. They look like the original members of Buena Vista Social Club. At this popular night spot, locals invite visitors to take their first steps of salsa and rumba. Little by little, everyone loosens up, maybe with the help of a mojito or Cuba Libre, cheap at 3.50 CUC (about USD $4.00). In this sparsely decorated bar, beer costs more than rum.

The first town built by Spanish settlers in Cuba, Baracoa is fast rebuilding after it was hard hit by Hurricane Matthew in October 2016. The storm destroyed over 95% of the rooftops in the area. Nestled in a valley surrounded by tall flat hills, resembling a green Arizona, this sleepy colonial town is one of my absolute favorite places to visit. Cobblestone streets encourage a slow pace along the main avenue, where galleries proudly display the paintings and sculptures of young Cuban artists, often depicting new and sometimes anti-establishment themes. It is also home to one of the oldest churches in Cuba. Nearby the triangular square boasts tall palm trees that provide a welcome shade in the hot afternoon sun. You can see the legacy of the African slave trade, which was centered in Baracoa, in the faces of the locals. Descended from a mix of African and Táino Indian roots, most people living in Baracoa are of darker complexion than their neighbors in the West and in Havana.

On our trip Cuba: Past, Present and Future (November 30-December 10, 2017) we will learn about the indigenous and Afro-Cuban heritage strongly present in the eastern cities of Baracoa and Santiago de Cuba. Then, this cross-country itinerary also will take us to the Spanish-themed Havana and the French-influenced Trinidad and Cienfuegos. We feel the influences and changes in the music and dance of each regional area, and taste it in the amazing local food! 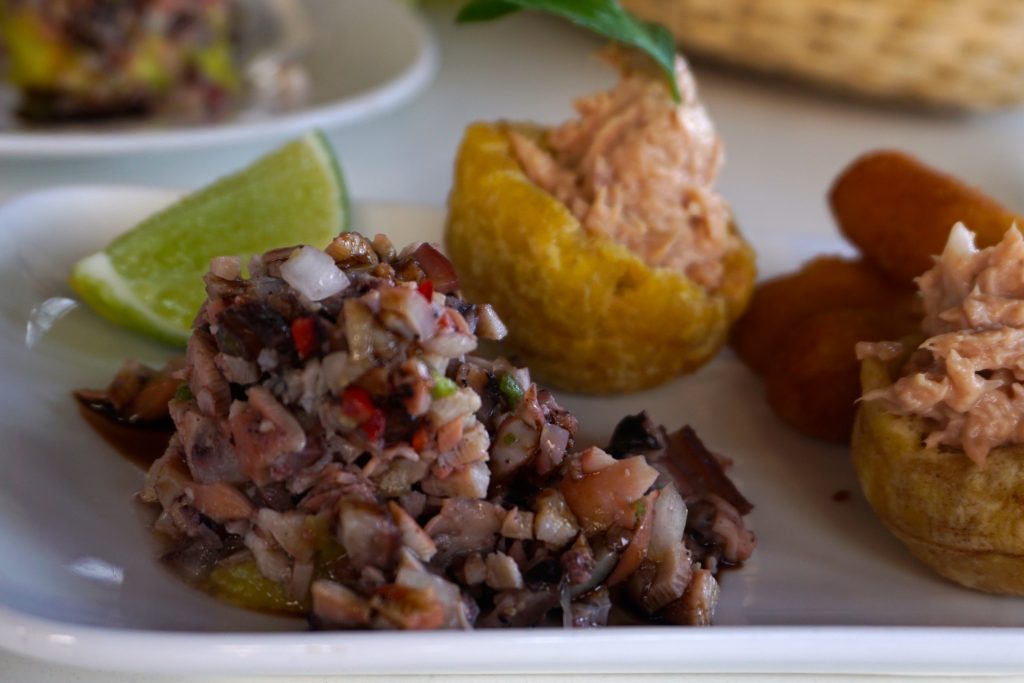 It’s early afternoon on a languid July day in Havana. We sip mojitos and nibble on tostones (fried plantains), malanga (taro root) fritters and bruschetta with fresh tomatoes, basil and feta cheese while we wait for our lunch on the serene patio of the restaurant Jardín de Los Milagros (The Miracle Garden), on one of Cross Cultural Journeys’ Cuba Summer Escapes (various dates and itineraries available).

In the past, Cuba was not known for its cuisine. But today the island is experiencing a culinary revolution, led by small private restaurants in the owner’s home. The government began licensing these paladares, as they’re known in Cuban slang, during the economic crisis in the early 1990s. Today, Havana boasts more than 500 paladares offering a wide range of international cuisines — French, Chinese, Italian, even Russian. But my favorites, including the Jardín, offer a modern take on traditional Cuban dishes like ropa vieja (stewed shredded beef) and black bean soup, and entrees like baked chicken, grilled pork chops, and Caribbean lobster tail.

One of my favorite ways to introduce our travelers to Cuba is to tour the burgeoning food scene from farm to table. We often visit one of several organic farms that supply produce to the capital city’s hotels and restaurants, and the neighborhood farmer’s markets that teem with tropical fruits and vegetables, herbs and spices, along with staples like rice, beans, flour and meat. And of course we’ll show you some of our favorite gourmet eateries — like El Cocinero, which is spectacularly set in the smokestack and rooftop of the same converted cooking oil factory that houses the Fábrica de Arte Cubano arts complex; and La Guarida, housed in an old townhouse that was the set for the acclaimed Cuban film “Strawberry & Chocolate.”

Back at the Jardín, while we wait for our lunch, the couple who own the place wave us up to their rooftop garden. “We’ve come a long way since your last visit!” she smiles. We scurry up the old spiral staircase to a lush and bountiful garden, where they grow all of their own tomatoes, lettuce, herbs, potatoes, and even the mint used in our cocktails. He proudly shows off several colonies of bees they are raising to keep their bounty pollinated. We bask in the hot afternoon sunshine, as the surrounding rooftops and patios steam and sizzle after a brief rainfall. In Havana in particular, you no longer have to settle for just rice and beans.