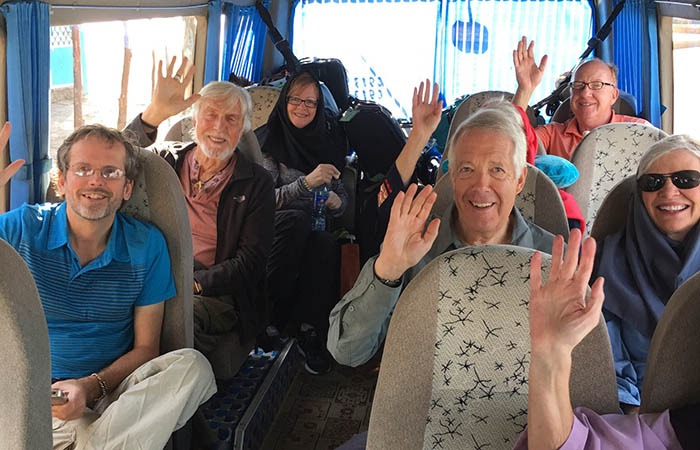 Perceptions of Persia: Travelogue from a Culture of Peace-Part 2

“Out beyond ideas of wrongdoing and rightdoing there is a field.
Will you meet me there?”
– Rumi

We spent one night in the Iranian equivalent of a Motel 6, a roadside caravansary, once a resting place for camels and travelers on their way through the unforgiving desert. Today, a two-lane freeway cuts through the red landscape. Like a distant mirage, the building appears as a silhouette against the setting sun. Our driver speeds up to make sure we get there before dark. Somebody mentions that there is a law against tourist buses driving after sunset. We make it just in time.

We are shown in to the area of the building that once was a stable, now converted to simple but clean, comfortable sleeping lofts. We are each assigned a mattress on Persian rug covered floors, and towels, like a regular hotel, are neatly folded up at the foot of each bed. From the inside, the building, a ten-sided circular structure with thick outer walls and heavy wooden doors like that of a citadel, or a fort, speaks to the once-important task of protecting the nightly visitors from the outside. We soon learn this is a mentality that permeates the Iranian culture even to this day.

Proud to be ancient. Reasons to defend.
The Persian culture is over 8,000 years old. It has endured a series of invasions from ancient times such as the Mongols, to wars and occupations from all sides. Most recently, Iran was wrongly named part of the ‘Axis of Evil’, yet the essence and strong cultural values have prevailed and remained strong. Persia is the birthplace of civil society and human rights, as well as architectural and engineering marvels such as the qanat, a type of underground water channel that has provided drinking water and irrigation to remote and arid areas since the dawn of agriculture.

A qanat is a gently-sloping tunnel connected to vertical air shafts that draws water horizontally from an aquifer deep inside a hill out to the surface. In Iran today, 37,000 of the more than 50,000 qanats built over three millennia are still in use. Due to the long-lasting and trusted provision of clean and healthy water flow, there is widespread investment in their maintenance. Each qanat is managed locally by the community it serves. The oldest qanats date back nearly 3,000 years. Similar structures can be found across the Middle East, North Africa, and Asia, and even as far west as Luxembourg and as far east as Japan.

Iran produces an astonishing 95% of its own food for nearly 80 million people. Only a few products, such as rice and sugar, are imported. As we travel through this ancient land, meet people, and learn about what has been created here, we can understand well that most Iranians feel these are assets worth protecting, both as national heritage and as a respected way of life.

I can’t help but reflect on what we often hear professed about defending our American way of life, the pursuit of happiness and some form of “freedom.” With the political discourse imploding from its own weight leading up to the 2016 presidential election, the international community already deems the United States an unimportant spec on the map for a few years to come. “It’s good for us, bad for you,” some of our newfound Iranian friends point out, with a bit of a smile on their faces. America has a long way to go. America, compared to this wise elder that is Iran, feels a bit like a teenager who is just learning how to pause in civil discourse.

A healthy mind and spirit fueled by poetry and love
Iran is the Motherland of poetry. 13th century poets, Rumi and Hafiz, are part of everyday life. Our taxi drivers excitedly recite poetry straight from the heart, or have a poetry book on tape playing instead of commercial radio. The defense of a healthy mind, spirit and body are communicated in love songs and through poetry. What most people do not know is that these prophecies come straight out of the Quran. We also learn that when men see a beautiful woman, they start to sing, a cultural practice that goes back thousands of years. Our bus driver would sing songs at the wheel every day, always with a big smile on his face.

Let’s not forget the root of this mentality. Iran, like many other countries that have gone through many and often violent regime changes, and as a result entire communities and families have been ripped apart. The hardships and conflicts can foster a sense of inclusivity, a search for a common ground, especially with people who resonate your kinship. They have a shared experience of survival. Iran, like Cuba, has accomplished what is seemingly impossible in many places, due too many outside distractions. They have in many ways been forced to face themselves, and subsequently heal. In Iran, you notice this sense of oneness in its people, in the poetry, art, fabrics, and weavings. In the incredible attention to detail and the holistic symbolism in their architecture.

One thing we share is that, just like in America at this time, current political overtones have little to do with the people on the ground and their daily lives. As in the U.S., the Iranian population doesn’t always agree with what is happening at the top. And isn’t that true of any culture in the world?

After dark at the caravansary
In the courtyard at the center of the decagonal building, we can see the stars in the big sky above us. As we climb up to the roof, it strikes us just how wide the sky appears, like in Montana or Arizona. A dark, deep blue is taking over the bright orange dusk, and we hear laughter, and female voices coming from the depths of the building.

Winding down the stairs, we stumble upon one of the circular rooms next to the restaurant. There, we find a group of red-cheeked women, about 30 of them, seated in a tight circle on cushions next to the walls. They gesture with their whole bodies for the women among us to enter.

We carefully remove our shoes, adjust our headscarves, and tiptoe carefully across what feels like center stage to find a place to sit. They all talk and giggle – most likely about us. A man enters and sits down. He speaks English and starts translating. We learn that this is a group of female middle-school teachers from Yazd who have escaped their families for a few days of traveling together. Like a women’s group anywhere in the world, they do this every year; go to a new place, to learn and to share with one another.

We share with them who we are and why we have traveled here. I look over at one of my co-travelers. She is crying. The experience of sitting in circle with women from an entirely different culture, to find we have so much in common, brings out the best in each of us. I look around the circle. One of the women could be my great-grandmother Maria. I ask to take a picture together with me.

We are invited to share a hot tangy dill and barley soup with them. They insist there is enough for all of us. When we can’t speak to each other, we just smile and nod. We know. It is so nice to be quiet and observe. I take it all in. The soup is delicious. It taste and smells like home.

2 Comments on “Perceptions of Persia : Travelogue from a Culture of Peace – Part 2”