Perceptions of Persia: Travelogue from a Culture of Peace

The air is hot and dry, but not as hot as I had imagined. In the distance, sharp arid mountaintops formed long before humans walked the Earth: dusty, sandy, red and brown. We’re speeding down the modern highway on our way from Shiraz to Isfahan; two cities known for their poetry, love and beauty. We are discovering Iran. Together with my nine co-travelers on Cross Cultural Journeys’ 14-day odyssey across this most misunderstood of Middle Eastern cultures, the stereotypes we all have carried with us from the outside are slowly, but very surely, dissipating, one by one.

Our driver Hamid is a 44-year-old man from Isfahan, a man who has driving in his blood. The faded stripes painted on the highway are mere suggestions of separation between lanes. Out here in the countryside, semi trucks, pickups and a few cars are weaving back and forth like a subconscious braid in the hot afternoon sun. The journey takes us, after a day and night of driving, to the bustling capital of Tehran. Then to the city of Kerman on Mohan Air, and onwards from there to a caravansary on the highway on our way to Shiraz, Persepolis and Isfahan, before returning finally to Tehran.

Hadi, our Iranian guide, has won the hearts of all of us. Witty, funny and incredibly knowledgeable, he is filling in the canvas of his homeland, painting for all of us a very different picture than most of us ever dreamed. We are in awe of what all of our senses are experiencing. We all are struck by how inadequate the English language is to fully describe it. There are simply no words that can do it justice. Iran is amazing. It has to be experienced.

Before coming to Iran, I received many veiled warnings (no pun intended!) from friends, and some surprised or even shocked faces, with comments like “be careful,” “why would you want to go there?” and complete misconceptions like “what’s left of it, right?” The thinking was that Iran somehow would be connected to what’s currently happening on the other side of the borders in Iraq and Syria. This is of course not the case. I don’t think I have ever been to a place where the outside pre-conceived notions so profoundly differ from the experience and the reality of the place. Is it true that this is an Islamic state that follows a certain set of values and relatively strict belief system that is different than that of many Western cultures? Yes, absolutely. It is entirely different.

But before you jump to conclusions that this difference is something the visitor needs to fear, or worse, that Iran’s system is in most ways oppressive to its people, and particularly its women, think again. Other stereotypes call their system antiquated and say that it would have to change on a fundamental level for its people to feel empowered and supportive of their government.

The Hijab – Symbol of Oppression?

Take for example the issue of the ‘hijab’ — the female dress code that requires a headscarf. It is often wrongly called a ‘burka’, which is the name in many Arabic countries like Saudi Arabia. As a female visiting Iran, I do have to follow the dress code for women introduced in its current form after the Islamic revolution of 1979. By law, I need to cover my head, ankles and wrists, and cannot show any curves, so tight clothing is not allowed. The reality of how this law is enforced, especially in the bigger cities, is different. The younger generation is working their headpieces farther and farther back on their heads, some just barely covering the top of the bun or ponytail on the back of their necks. Teens and twenty-something women wear skinny jeans and sneakers, and are not given any trouble. It seems to be mostly a matter of style and taste.

As in other Muslim countries, many Iranian women point out that there’s a certain comfort and freedom in not being objectified by men wherever they go. “Yes, but they still don’t have a choice in the matter,” goes the standard response in the West. Iranian women are some of the most forward, outspoken, and beautiful I have ever met. Speaking to them sure challenged any notion I had that they are quiet, obedient, and oppressed.

In the past, police in the streets of the cities might have been correcting people if their hijab was not appropriate and according to the law, but this is no longer so. The younger generation seems to be allowed to “experience” the hijab as they see fit, and just as in many other trends and styles in other cultures and countries, it changes with age as they get a bit older.

Some women wear black, which is a relic of Arab cultures. Iran as a nation is Persian. More traditional women wear a full piece that covers the head and neck, and some also wear the full black robe that covers the head and the whole body, but not the face – this is known as the chador, which resembles a triangular black tent from top to bottom. Black is a respected color. Historically, all Iranian Muslim women used to wear a black veil.

After the Islamic revolution of 1979, our group learned, Ayatollah Khomeini met with thousands of women, and professed to the women of Iran that they form half of their society. Khomeini convinced women that it’s unlikely that somebody would come down from the sky to make their life better, and they had to leave the comfort of their house, be more active, help their men, and make a better future for their children, something that had been next to impossible under the regime of the Shah.

Currently the local universities are more than 60% women, and typical households share the duties evenly between husband and wife. Khomeini made women aware of the fact that there is nothing in the holy book that tells you to wear a black robe. After the Islamic revolution, women became much more active in Iranian society, much more so than in their neighboring Arabic countries.

Back on the Bus

In our traveling group, we are about half women and half men. The women help one another during the relatively clumsy first few days of trying to get their headpieces on just right. Hair clips or bobby pins do the trick. As we soon find out, most tourists nonchalantly wrap their favorite scarf around the head and show a bit of the front of the hair. We follow suit, and begin to relax; we giggle about it quite a bit.

The bus slows down and makes a turn down a side road toward a village. Some locals wave to us and children run toward us, stopping a short distance from the bus. Our driver pulls out his coffee box, sets up a makeshift espresso stand and makes us a late afternoon round of strong small cups of Iranian coffee. He nods for us to finish the chocolate-covered shortbread-like cookies that are almost completely melted in the heat. We breathe in the dry air, sipping the hot coffee. We smile and look at each other. Our shared experience is profound. The sun is about to set, and we jump back onto the bus. Tangerine, anyone? Or pistachios? 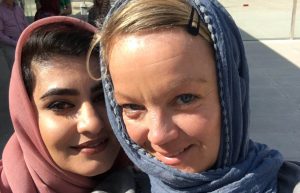 Cilla Utne is the CEO of Cross Cultural Journeys

8 Comments on “Perceptions of Persia: Travelogue from a Culture of Peace – Part I”